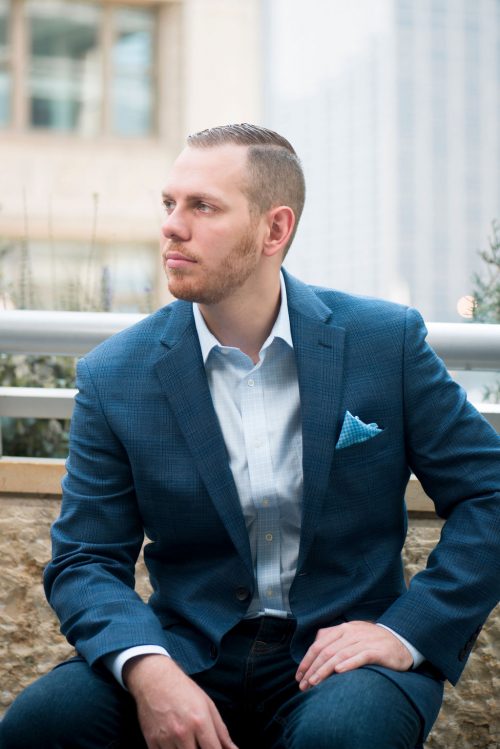 Frank McGovern is a Cybersecurity Architect and Founder of Team Blue Con, located in Chicago, Illinois.

You can view Frank McGovern’s Resume and download a PDF copy here.

Frank’s professional life started at 17 when he joined the United States Marine Corps. He focused on graduating a semester early from High School in order to enlist in February 2006. Aligning him to graduate from boot camp only a week prior to his classmates graduating High School.

During his service in the Marines, he performed the role of Intelligence Specialist. Working for a number of units, the most notable being MACG-28, followed by G2 for 2nd MAW at MCAS Cherry Point, and finally VMU-2. Frank deployed twice to Iraq (2007: Al Qa’im and 2008: Al Taqaddum) with VMU-2 for intelligence, surveillance and reconnaissance (ISR) missions.

In layman terms, he was the intelligence analyst during drone missions. He was responsible for instructing drone pilots on where to fly and what to look for. Frank took photos, called in patrols or jets, relayed information to ground units, and wrote up mission reports on findings.

Frank’s time with the Marine Corps came to a close in October 2008.

After the military, Frank began attending college to secure his Bachelor of Applied Science degree in Information Systems Security. At the same time, he worked at Best Buy Geek Squad for nearly two years, and briefly worked for an Avaya reseller/installer. From there, Frank moved to Walsh Construction, a Fortune 100 (#89, 2020) Private construction company, where he began the longest stint of his career, starting as a Help Desk Intern.

After graduating college, Frank was promoted to the Infrastructure team of Walsh Construction as a Network Infrastructure Engineer. Eventually climbing the ladder to a Senior Information Security Engineer role.

At Walsh Construction, Frank’s title was engineer, however, he had the unique challenges of working for a large organization with a small cybersecurity team. As a result, Frank’s responsibilities grew beyond his role to encompass cybersecurity architecture, testing, implementation, and operationalization. He also was in charge of composing the organization’s first formal cybersecurity policy and beginning the implementation of a formal governance, risk, and compliance program. Frank moved on from Walsh Construction in 2020 after a 10 year tenure.

Currently, Frank works at StoneX Group, Inc., a Fortune 100 (#58, 2021) Public international financial services organization, as a Cybersecurity Architect. In this role, he is responsible for designing and aiding with cybersecurity strategy, roadmaps, and initiatives. These are required to protect the full organization including a vast merger and acquisition portfolio.

Frank is the founder of the Chicago-based cybersecurity conference Blue Team Con. The conference focuses on building an ecosystem, community, and a strong lobby-con for those that work for organizations on the defense side. This includes practitioners performing enterprise defense, but also Governance, Risk, and Compliance (GRC) personnel, as well as Application Security Developers.

For fun, Frank enjoys working out, trying new restaurants in Chicago, playing (and sometimes streaming) video games (WoW, Fallout), cycling on and off the Keto diet, and range or trap shooting. He is also exploring the world of Autocross, a timed driving competition requiring drivers to navigate complicated road courses.

All of this experience and his current position and dedication to cybersecurity has provided Frank with unique perspectives. He feels it is important to share those experiences to help others. There is no set cadence for writing, but you can find out every time a new post is live by following Frank McGovern on Twitter.

“I look forward to sharing a lot that I have learned and how to achieve cybersecurity maturity within an organization. I understand not everything may apply, but hopefully something helps” says Frank.

“As always, please critique me. I value learning. So, if I am wrong or my article could include more or be better worded, please leave a comment and let me know. I look forward to seeing you around!”.